This week, Capital One announced that the holders of select Capital One Venture-branded and Spark Miles cards can now access select Plaza Premium lounges worldwide. The move adds a further 100+ lounges to the list of over 1,300 lounges you can access with eligible Capital One credit cards.

With the new changes, cardholders of three Capital One cards can now access the Plaza Premium Lounge network: 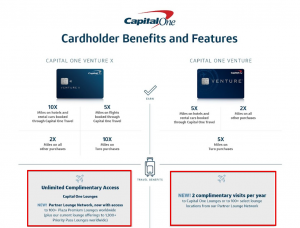 The Plaza Premium network has a much smaller footprint with just over 100 lounges worldwide. In the U.S. and Canada, there are Plaza Premium Lounges at the following locations:

At first glance, the list may seem a little underwhelming. But, it is the quality of lounges that counts. The list includes the Virgin Atlantic Clubhouse at San Francisco SFO:

Not to mention, you can now use your Capital One Venture X to access the Virgin Atlantic Clubhouse at New York’s JFK Terminal 4.

In fact, you should be able to access all US-based Virgin Atlantic Clubhouses using the new Plaza Premium perk — except the Clubhouse at Boston Logan International BOS. If you don’t hold the Capital One Venture X card, but hold the Amex Platinum card, then you can use that card to gain access to the Plaza Premium lounge network when traveling. So, you have a backup option for lounge access.

Extend Your Aeroplan Elite Status Through 2023 with Card Spending